The previous entry featured a rather cryptic image of a suit. I suppose the connecting theme was the recent talk of business cards.

But what is the word for “suit” in Japanese?

It doesn’t sound like a foreign word and it has its own kanji rather than being written in katakana, so this must be an original Japanese word, right?

The word comes from “Savile Row”, the street in London known for its fine suit tailors. 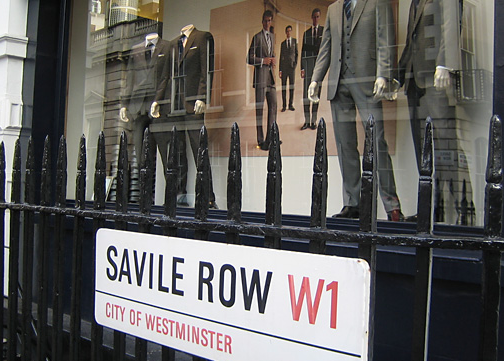 One can imagine Japanese visiting London, seeing these impressive outfitters, being enamored with how smart the European style of suit looked, and taking the fashion home with them, giving the name of this style the affectionate “sebiro”.

It reminded me of something my dad told me a couple of years ago while we were waiting at Vauxhall station.

The tale goes that a Russian delegation visited London to see, among other things, the railway system. At Vauxhall station they asked what this was called (meaning the building itself) and were told “Vauxhall”. The misunderstanding stuck and “vokzal” entered the Russian language as the word for railway station.

We don’t really know how true the story is – and there are other theories – but it’s a fun mental image.

Perhaps “sebiro” comes out of a similar misunderstanding?

The next entry will talk about another Japanese term adapted from a foreign word.