Most of my posts begin something like “yesterday I talked about” or “yesterday I shared a picture of”, and so on.

Today is going to begin “yesterday”, but not be quite the same.

I think this sentence is all OK. “kinō” sets the time, “boku” means “I” (an option other than “watashi” but only males can use it), “wa” indicates I am the subject, “mājan” means “Mahjongg”, “o” (を) in this case indicates the object, and – if my research is correct – then for games in this context you more naturally say “I did ” (” o shimashita”) than using a precise word like “asobimashita” (遊びました = “played”).

Perhaps there is a more natural way to say it, but I assume this is fine.

When I lived in Japan I liked to coax native speakers into saying certain phrases naturally and then noting down what they said.

I would prime them in basic English with a piece of information such as “yesterday you played Mahjongg” repeated slowly and with hand gestures until they had completely understood it. Then I would quickly follow up – in my best Japanese – with something like 昨日は何をしましたか (“kinō wa nani o shimashita ka” = “what did you do yesterday?”).

Typically they would reply with instinctive Japanese, providing me with my “native” phrasing.

Alas, I couldn’t do that trick for my sentence above. I hope it was reasonably natural sounding all the same. I think it’s quite likely I can safely drop the “boku wa” and make it even more natural, but…I’m not certain.

Anyway…yesterday I played Mahjongg because it was a friend’s birthday. We spent the day playing card and board games. It was a tonne of fun.

In Mahjongg, the tiles have lots of pretty characters on them. Perhaps I am being overly 甘い by saying “pretty characters” like that but in scoring Mahjongg a sense of “prettiness” is very relevant to how many points a hand is worth.

What came up during the game was that I found myself naturally wanting to use Japanese language numbers when I saw them on tiles.

At one point I saw this tile: 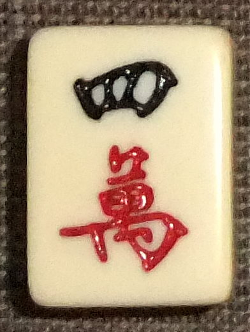 We had been saying the English number followed by “man” in the game up to that point to indicate the number tiles (as I believe is correct) but an instinct from somewhere made me say “shi man” instead of “four man” that time.

To my surprise, one of the other players corrected me saying “Yon! Shi would not be used because of the association with death”.

In Japanese there are two ways of saying “4”, and “yon” is often preferred over “shi” as the literal meaning of “shi” is death.

Locksleyu corrected me yesterday on precisely such an error. He also wrote a very good entry on “counting irregularities” here. Check it out!

Today’s header is The God of Death, from Death Note. Tomorrow we will go a little deeper.